If you have adult acne and have fat around the middle i.e.: a large waist line or a big stomach, it could mean that you have a high insulin level — a symptom of pre-diabetes. Patients who have diabetes and acne often have difficulty getting their acne under control and in some cases, a bad case of acne can be one of the first visible signs of developing diabetes. Because the high blood sugar levels found in diabetes also have been implicated in acne formation, many clinicians are not surprised that the two could be related.

Acne vulgaris, the most common form of acne, can be expected at some point in the life of a teen. But as an adult, acne becomes less common and more asymptomatic. Many adults suffering from diabetes also suffer from acne. While most dermatologists are now saying that diet does not have much to do with whether or not people develop acne, there seems to be a clear connection between adult acne and abnormal blood sugar levels.

Acne is an inflammatory disease that occurs when a hair follicle becomes blocked by an over abundance of secreted oil from the sebaceous gland and dead skin cells. The hair is unable to break through the pore and shaft, thus causing bacteria to develop. This leads to inflammation, otherwise known as Propionibacterium acnes. Diabetes is one of many metabolic disorders. People who suffer from such metabolic disorders often find themselves affected by acne throughout adulthood. Diabetes-related acne is due to an overproduction of insulin or insulin resistance.

Diabetes affects the entire body, including the skin. According to the American Diabetes Association, at least 33 percent of people with diabetes will have a skin disorder caused or affected by diabetes at some time in their lives. In fact, such problems are sometimes the first sign that a person has diabetes.

Eating a diet of high sugars or fast acting sugars such as starch like bread, pasta, and potatoes, sugary cakes and biscuits, sugary drinks including fruit juices will raise your insulin level and try to deal with this surge in blood sugar. The surge in insulin will act directly with the fat cells in your stomach and store fat in the stomach’s walls. Having too much fat and/or sugar can be a precursor for diabetes.  It’s also a known fact that an excess amount of sugar and salt can lead to acne.

Some newly diagnosed diabetics may find that their acne clears up on its own, but moderate and severe cases--or cases not responsive to basic soap-and-warm water treatment--might require some extra treatment. Moisturizing your face may seem counterintuitive but using milder treatments can avoid irritating the skin. In some cases, a physician may prescribe antibiotics such as tetracycline or erythromycin in an attempt to clear up the infection underlying the pimples.

One of the best minerals for lowering blood sugar is chromium. Many naturopathic doctors will recommend this mineral for those that are looking to clear up their acne as well. Chromium should be taken after meals in order to help the body regulate the amount of insulin that is being excreted to process food, and will help those whose bodies do not properly recognize insulin by improving the function of the liver and kidneys. When the liver is cleansed, this gives the skin a healthy glow, and will unclog the pores, which keeps acne under control.

Making some changes in your diet can significantly make a difference in your skin and blood sugar levels. Avoid sugary foods such as cakes, juice, sodas, candy. Ease off too much starch: no more subway sandwiches, take off the bun on a hamburger, avoid pasta dishes, and avoid potatoes, fries, pizzas and big rice dishes. Eat whole grain, lots of green leafy vegetables, and lean protein and drinks lots of water. Eat fruit in moderation like berries such as blueberries, strawberries and raspberries.

Moderate daily exercise can lower your insulin level and reduce acne breakouts. Even if it is just walking around the block for thirty minutes — just do it. Move around and be active after a meal, even if it just cleaning the dishes and loading the dishwasher or playing with your dog. Normally a diet change and a consistent exercise plan will keep diabetes at bay if you are pre-diabetic. If you are overweight, go on a healthy diet to lose weight. Not only will you find your body fitter and healthier, your skin will clear up too and you may find that adult acne will no longer be an issue.

Boils, carbuncles, fungal infections, itching, allergic reactions and diabetic dermopathy are a few of the many skin ailments associated with diabetes. For an accurate diagnosis of a persistent skin ailment associated with diabetes, consult a dermatologist. Skin lesions, cuts or open sores located on the foot should have immediate medical attention in diabetic persons. In cases of acne, which already involves infection by the bacteria Propionibacterium acnes, more severe infections are possible without proper hygiene and skin care. Additionally, , diabetics, especially those with acne should drink lots of water, because water intake is critical in diabetes and low water intake also has been linked to acne.

Accutane is a prescribed oral medication used for treating severe acne.  Patients diagnosed with diabetes should be careful when choosing Accutane.  According the drug’s manufacturer, Accutane can potentially cause blood sugar fluctuations. AcneEase, however is an herbal oral acne skin treatment. Made from natural ingredients, AcneEase is a safe skincare product to use among diabetics suffering from acne. 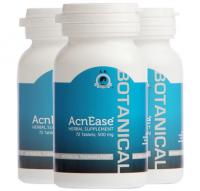 Why Taking Care of Your Skin With Nowhere to Go?

Foods to Avoid for Acne (and What to Eat Instead!)

8 Skincare Tips to keep you Looking Fresh While Traveling