Estrogen 101: How this women’s hormone may affect your skin... Other parts of your body 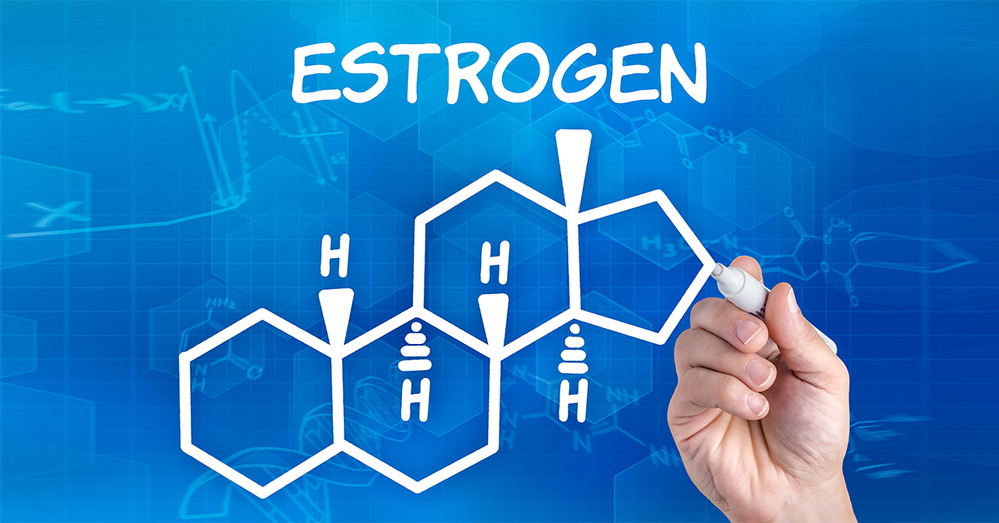 In our previous articles ( links) we talked about the nature of steroids and testosterone. Today , we focus on the specific female hormone – estrogen.

The effect of estrogen is to moderate or regulate the growth and function of several organs in the body, mainly the uterus and breast but also the skin that is indeed the largest organ in the body. Of course, we cannot talk about estrogen without including its precursor and companion, progesterone, both of which are critical in the reproductive phase of life. The effect of estrogen and progesterone on the uterus is to prime it for pregnancy, and if this does not occur, to initiate the menstrual cycle. Regarding the breast, its effect is to promote their growth and size. Breast budding in young girls is the first sign of puberty, indicating the onset of estrogen production.

Under normal conditions the effects of estrogen on the skin are quite the opposite to that of testosterone. As we learned earlier, the effect of testosterone on the skin is to “masculinize” the texture and quality of the skin, while the effect of estrogen throughout the reproductive years of the female is to “feminize” the skin and other tissues. These effects would impart a smooth texture of the skin and permit only a minimal amount of hair growth in undesirable areas of the body.

Both estrogen and progesterone are produced by the ovaries, two gonads, that are approximately 1-2 inches (2.5 – 5.0 cm) in size and located in the abdomen. One of the main functions of the ovaries is to nurture the growth of the follicles which contain the oocytes or eggs. During the reproductive years between the onset and cessation of menstrual cycles, But of the million plus follicles present at birth, women will only produce between 400-500 mature eggs that will ovulate. The second function of the ovary and equally important corollary is to produce estrogen and progesterone via the corpus luteum in sufficient quantities for implantation of the ovum (egg) in the uterus. To achieve these objectives, these two hormones are regulated by pituitary hormones (FSH – Follicle stimulating hormone, and LH – Luteinizing hormone), and other locally produced hormone by the ovaries.

We have previously discussed the role of the FSH and LH in males and females in a general sense, however, it is now important to clarify their specific cyclic nature in females. As suggested by their names, FSH or follicle stimulating hormone is the main player in maturation of the eggs and to sustain the general health of the follicles in the ovaries. LH or Luteinizing hormone takes over during the second half of the menstrual cycle to produce the progesterone and estrogen necessary for implantation of the ovum into the uterine wall. Of note is the fact that progesterone is also a precursor to testosterone which can be made in small quantities by the ovaries. It should now be clear that all these hormones will become major players during the reproductive years in females.

It is important to understand that these hormones are secreted in a cyclic manner during a woman’s lifetime, the lowest amount during the prepubertal years, peaking maximally during the reproductive years, and declining abruptly at menopause. Therefore, one would expect the effects of these hormones also to mimic their circulating levels at various stages of life. Hence, the changes in the skin are most readily manifest at the two (hormonal) turning points in life for women, the menarche – or the initiation of the menstrual cycle, and menopause - the cessation of the menstrual cycles.

At the time of menarche, the young skin is prone to acne very easily as the hormones have not yet reached their peak of maturity. Thus, during the early years after menarche, the menstrual cycles may be irregular, intermittent, or even disappear for a few months at a time before establishing their “regular” pattern, whatever that turns out to be. It is during this time that we expect the fluctuation of the hormones and the interplay of the dominant hormone to take over its effect on the skin. Therefore, if the amount of circulating testosterone in the young girl or woman is more than estrogen, we can safely assume some impact of acne on the skin. This may be accompanied by irregular menstrual cycles, mood changes and perhaps even changes in growth (height).

Continuing in the reproductive years, most women will “outgrow” their pubertal mix of hormones and establish a more permanent cycle unless it is disrupted by other illnesses, medications, dietary changes, or pregnancy. Except for the latter, all other items mentioned would lower the levels of estrogen and may or may not induce much acne but will have a clear impact on the texture or quality of the collagen in the skin. For example, long term steroid use for various illnesses will cause decrease changes in the elasticity of the skin along with some pigment changes.

Pregnancy has its skin benefits due to the high levels of estrogen and progesterone which tend to protect the skin from blemishes. In fact, some acne will improve or disappear entirely during pregnancy replaced by the healthy “glow” of pregnancy, only to resurface once the baby has been delivered. These changes in the effect on the skin are to be expected, since the markedly elevated levels of estrogen produce very high quantities of sex-hormone binding globulin which acts as a sponge to mop up any excess testosterone that is in the circulation. Thus, the effects of testosterone, if present in the circulation, are minimized or blunted. Recall that testosterone converts to estrogen and in the pregnant state which requires tremendous amounts of estrogen to sustain the pregnancy, therefore there is a natural tendency to favor the production of estrogen.

The post-partum blues ( the specific mood swings after delivery of the baby) are not without reason considering the dramatic changes that occur in a woman’s body in a relatively short span of time. All the female hormones are temporarily turned off, except for prolactin which is necessary for lactation. Of course, the previously trapped testosterone, which breaks away from the binding globulin, is now free to roam around and can create havoc on the skin at a time when the mother is unduly stressed with the new baby routine, lack of sleep and other manner of mental and physical changes.

At menopause and in the years beyond, testosterone tends to show its ugly nature again, now unfettered by extremely dwindling to low levels of estrogen. This can be marked by some acne but predominantly changes in hair pattern mimicking the male pattern and growth at unwanted sites. Once again, these are easily explained by the imbalance between the two main hormones testosterone and estrogen, making the skin their final battleground.

The management of these skin disorders will require the usual armamentarium of good nutrition, exercise, rest and possibly the selected use of some non-toxic medications. Thus, herbal products for acne are the first choice, and prescription drugs should be used sparingly in the growing pubertal children. Local applications of creams or other agents for the skin may be helpful. Severe acne or eruptive acne with abscess formation may require the use of antibiotics or even some minor surgical procedures to treat the cystic acne. If appropriate and indicated for regulation of menstrual bleeding, birth control pills can be used in some women which will also prevent or ameliorate some of the problems of acne and hirsutism.

Selective and appropriate use of medications for postmenopausal women should be used with care, particularly for women who are taking some form of estrogen for the relief of postmenopausal symptoms. The products that contain estrogen may unmask unwanted side effects on the breast and uterus. Plant-based estrogens may be another alternative but again should not be used without consulting with their gynecologist or primary care physicians. On the other hand, some medications may lower the levels of estrogen or disrupt the enzymes responsible for interconversion between testosterone and estrogen. Thus, these types of inhibitors of estrogen will naturally favor the dominance of testosterone in an already deficient estrogen background. These drugs have other side effects that are more problematic than their potential for acne or skin changes.

As a special note, transgender women who require the use of estrogen treatment on a regular basis may still struggle to hide their prior skin problems that may have been present previously. Over time, their skin will take on the typical smoother texture and will be free of acne. This will happen due to the high levels of estrogen producing the necessary elevations in the binding globulin as discussed previously. More importantly, the estrogen will inhibit the pituitary from releasing LH which will prevent new testosterone from being produced. Naturally, there may be occasional breakouts of the skin if the levels of estrogen are not maintained for any reason, or the treatment is interrupted.